According to the World Health Organization (WHO), dementia is a disease that affects nearly 50 million people worldwide, with another 10 million diagnoses each year. Almost everyone knows somebody who has this disease. While it’s widely-diagnosed, it’s vastly misunderstood due to the nature of it. This blog will cover some of the most abundant myths surrounding Alzheimer’s and other dementias. While some myths can be rooted in truth, most are completely false, scary, or misrepresentative of the majority of people who have these diseases.

MYTH 1: THEY CAN’T UNDERSTAND THEIR SURROUNDINGS

One of the most abundant and harmful myths is that people with dementia cannot understand the world around them. This is so far from the truth, and it implies that a person with dementia is no longer a person. To start, there are a million different ways that dementia affects someone – dementia is as unique as the person who has it. There are people with dementia who can’t speak but express themselves in other ways, there are dementias that only affect a person’s mobility, there are dementias that hardly show any symptoms – if you ran into them on the street, you wouldn’t know they have it! It is different for everybody. There are plenty of people with dementia who can understand every word spoken to them. In fact, a lot of people with dementia are very good at picking up on facial and body cues, and use them to react to situations they find themselves in (see Teepa Snow’s videos about Positive Approach, where she discusses how people with dementia will be in a better or worse mood depending on how you are speaking to them). We see the trope in movies a lot - there is a person in a coma, but they can still hear what’s going on in the world around them. Dementia is not equivalent to someone being in a coma but some similarities can be drawn between the disease and thinking the person can’t understand you. A lot, if not all, of what you do and say is still registered and understood by your loved one with dementia. Be kind and careful with your words.

MYTH 2: ONCE YOU’RE DIAGNOSED, YOUR LIFE IS OVER

Another myth, equally as harmful, is that life is over for people diagnosed with dementia. Dementia is not a nail in the coffin. People can live for years and have very fulfilling lives while still having a dementia diagnosis. There are many people with dementia who become public speakers and advocates for those who may not be able to speak up for themselves. There are also lots of bloggers who document their lives with dementia, like Wendy Mitchell. In 2014, Wendy was diagnosed with Young-Onset Dementia. In her blog, Which Me Am I Today? (https://whichmeamitoday.wordpress.com/), she discusses her life, her daughter’s cat, and seeks to bring awareness to the disease, especially in younger people. This leads me to the next myth I’d like to tackle…

Dementia does not only affect old people. It might be a rarity, but some people as young as 30 have been diagnosed with dementia. Alzheimer’s disease can affect 1 in 3 young people. According to alzheimers.org, young people who are developing Alzheimer’s may not notice memory problems at first. Instead, they’re more likely to discover problems with their mobility, vision, or speech. The problem with getting a proper diagnosis when a person is younger is that it could be chalked up to other things – stress, difficulties with relationships or jobs, menopause, or other normal signs of aging. It can be very easy to dismiss some of these symptoms, which means the person developing the disease can miss out on help they really need. If a younger person suspects they might have an early-onset dementia, it might be best to get a full assessment done, including a full-body physical, assessment of changes in daily life, and a brain scan. Just this year, Congress reauthorized the Older Americans Act. Now called the Supporting Older Americans Act of 2020, ‘this compromise agreement reauthorizes the Older Americans Act, and includes the key provisions from the Younger-Onset Alzheimer’s Disease Act that will ensure support for all living with Alzheimer’s. With the passage of the Supporting Older Americans Act of 2020, we can build upon the additional $350 million in Alzheimer’s research funding that was signed into law at the end of 2019. This will make a real difference in the lives of those living with younger-onset Alzheimer’s, ensuring they finally have access to needed support services that will improve their lives” (Washington Examiner).

A lot of people believe the myth that being diagnosed with dementia will lead to violent and aggressive behaviors. These people don’t just become angry or unruly. A majority of the time, if someone with dementia is lashing out in anger, it’s due to an unmet need. This could be hunger, needing to use the restroom, or something affecting them emotionally isn’t being cared for. Dementia can lead to confusion, as the brain’s condition is progressively worsening. Loss of memory can make it hard for people to properly express themselves and they might start expressing their confusion and fear through hostile behavior. The best way to avoid this is to create a calming, peaceful environment that is comfortable for the person, especially while interacting with them.

The big takeaway from this blog, I hope, is that we all realize people with dementia are still people and are all different. Perpetuating these myths and ideas makes it difficult for people to really understand the disease, as they get a false sense of what it can be like. The disease is hard enough as is. While there’s no cure for dementia, we can help make life easier for those around us who have it. 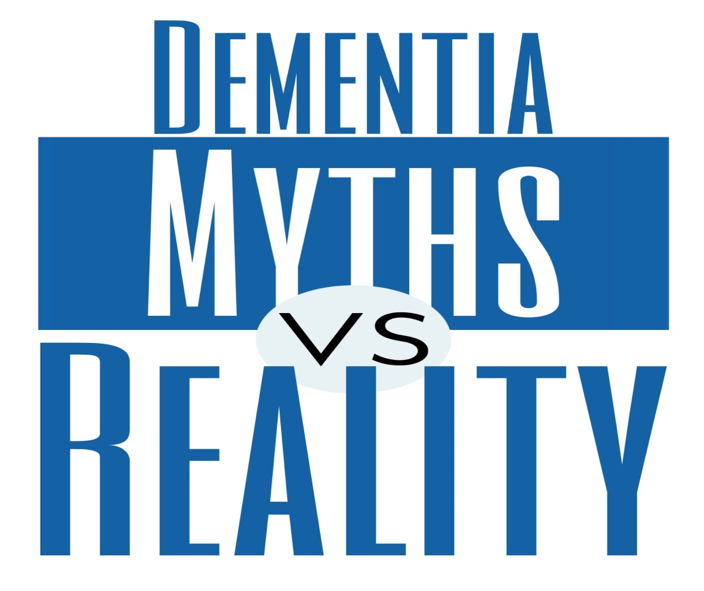